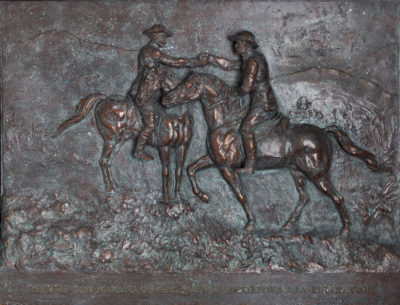 
General Maximo Gomez was born in the Dominican Republic in 1836. He trained as an officer in the Spanish Army and took part in the struggle against the 1855 Haitian invasion as a cavalry officer. He subsequently moved his family to Cuba, took up the Cuban rebel cause, and helped train the Cuban Army. Between the second two wars of Cuban independence Gomez supervised a laborers’ brigade in the construction of the Panama Canal. Limited munitions led him to create the tactic of the “Machete Charge” against the Spanish Army.

Garcia died in 1898 in Washington D.C.; General Gomez died in 1905 in Havana, Cuba. Both are buried in Cuba. Maximo Gomez Park (Domino Park) in Miami, Florida is named in his honor. His portrait is on the Cuban 10-peso bill.