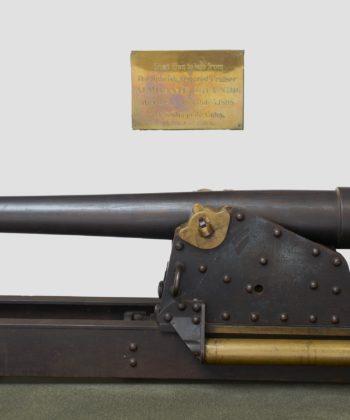 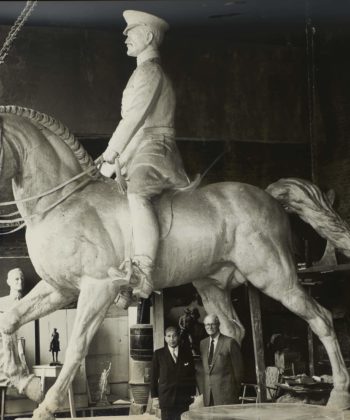 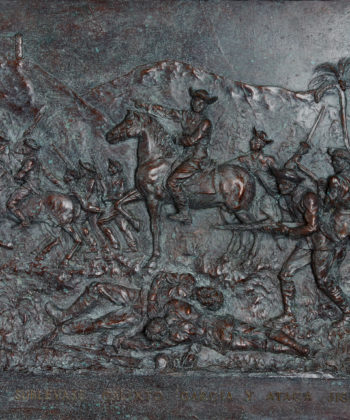 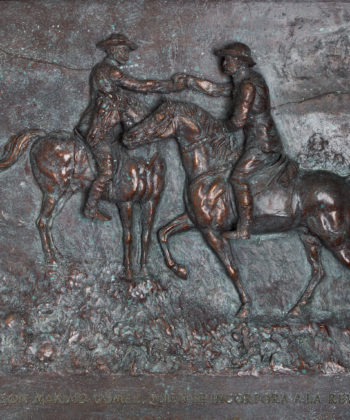 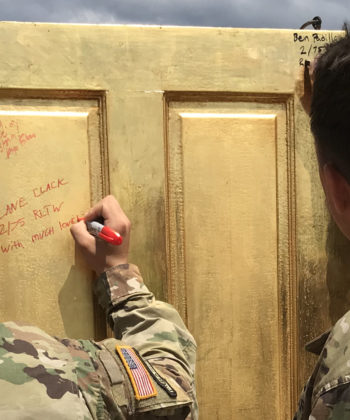 The Library Trust is proud to present a retrospective of the artist William Adair, a member of the Army and Navy Club and advisor to the Library Trust.

First, in the B2 squash court, is his multifaceted, ongoing conceptual art project, The Golden Doors to Infinity. The project’s premise is simple: Adair collects abandoned doors anywhere they lie, and then repurposes them as “entryways” into landmark historical events. First, he covers them with gold leaf. He then installs them at historic sites across the world to be written and marked upon by visitors and passersby. The messages left on the doors honor shared cultural values inspired by the specific location of the site and connected by the universally symbolic value of gold.

The Golden Doors to Infinity Project fosters a close connection to the American military, due to Bill’s ancestral history of U.S. military service, as well as the inspiration he has drawn from working with The Army and Navy Club art collection for thirty years. As a result, this series includes a number of Doors that memorialize American military events.

Club Members are invited to sign the doors with the markers provided at the entrance to the exhibition.

Thayer is widely regarded as the “father of camouflage.” After studying natural camouflage patterns of animals in nature, he began developing similar designs for Naval vessels and infantry uniforms for the Allied forces during the First World War. However, camouflage was not fully embraced until World War II, nearly two decades after Thayer died in 1921.

Perhaps most fascinating of all were Thayer’s “dazzle” pattern concepts for Navy warships, designed for the days of periscope to confuse the perceived speed and trajectory of the ship, theoretically making it safer from torpedo fire.

All of the warships in Adair’s drawings are based on actual ships from WWII. Perhaps most personally, the USS Borie (DD-704), which was commanded by his uncle, Captain Noah Adair, US Navy. The Borie was struck by a Japanese kamikaze on August 9, 1945, during the final raids on the Japanese islands. Noah was blown off the bridge into the water, losing his hearing, but thankfully he survived. Each of these ships has a similarly harrowing story.

Through this series, Adair pays homage to his father’s generation who fought in World War II, and commemorates Abbott Thayer’s early and often overlooked contributions to the development of camouflage.