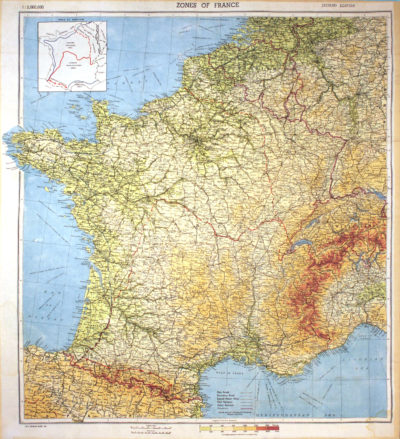 
From April, 2019: The Army and Navy Club, gift of Carole Brookins


British-made topographical silk maps of the zones of German-occupied France were issued to British and American Allied officers and senior NCOs for the Normandy landings during World War II. Primarily developed for aviators and issued to the Royal Air Force and the U.S. Army Air Force, the scale of these maps lack the details necessary for tactical ground use. However, officers of the assault divisions for the Normandy invasion also received them, and MI9, Britain’s Military Intelligence Section, ran an Escape & Evasion program that issued similar maps.

Silk maps were used because they were durable, not prone to quick deterioration, produced no noise when handled, and were easy to conceal or smuggle into a POW camp. While some early British tactical maps were printed on rejected parachute silk, nearly all post-1942 British maps were made of synthetic fabrics.