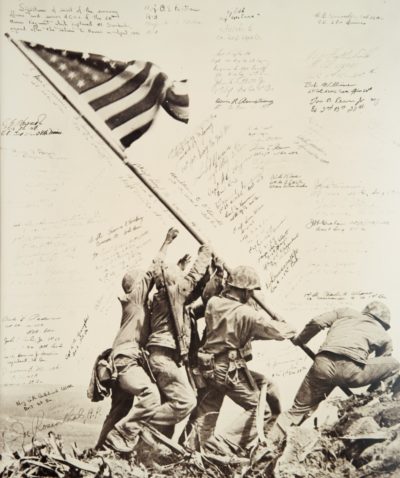 
This Iwo Jima photograph was signed upon arrival in Hawaii in April 1945 by surviving officers and noncommissioned officers of the 28th Marine Regiment, the unit that captured Mount Suribachi during the Battle of Iwo Jima. The last survivor among the men raising the flag was thought for years to be Navy Corpsman John “Doc” Bradley, who died of a stroke in Antigo, Wisconsin in January 1994. “I just jumped in and gave them a hand,” he said. “I just came along, I was in a certain place at a certain time.” Though a member of the combat patrol that raised the original, smaller U.S. flag, he was incorrectly identified as one of the six men raising a second, larger flag less than two hours later when Associated Press photographer Joe Rosenthal shot his iconic photo.