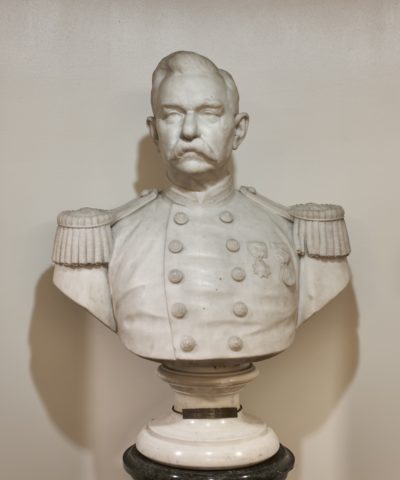 
Admiral Merry went to sea at age 17, served in the Merchant Marine for six years, and began his naval career in 1862. Among many battles he fought was the attack on Fort Fisher, North Carolina during the Civil War. He led the shore assault from his ship, Osceola, was wounded three times, and suffered lameness for the next twelve years. Later he served with the Asiatic fleet in Chinese waters. Subsequent service was aboard ships off the coast of Florida, South Carolina, Virginia, and then Newfoundland, where he selected and chartered the Proteus for the Greely Arctic expedition. From 1876 to 1879 he was on special hydrographic service in the Mediterranean. He was a Club member from 1888 until his death in 1916.

The artist, Fernando Vichi, was part of the talented band of Tuscan sculptors associated with the Bazzanti gallery in Florence. His compositions are varied in subject matter, from busts after the Antique to Orientalist themes and Renaissance-inspired models. Like many other late nineteenth-century sculptors, Vichi often took inspiration from classical antiquity. This work in white marble demonstrates a high technical virtuosity, particularly in Vichi's mastery of facial expression, modeling of form, and clothing.