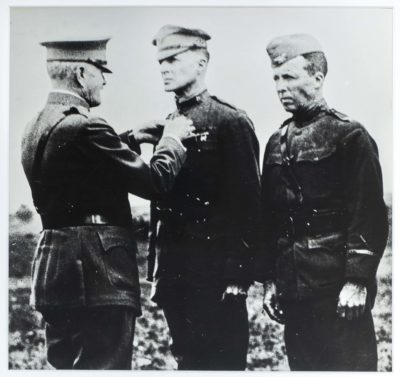 The Battle of Château-Thierry was fought on July 18, 1918, one of the first actions of the American Expeditionary Forces (AEF) in World War I under the command of General Pershing. “Château-Thierry” was part of the Second Battle of the Marne, prompted by a German offensive launched on 15 July against the AEF, an expeditionary force consisting of troops from both the Army and Marine Corps, and the newest troops on the front.

On the morning of 18 July 1918, French and American forces between Fontenoy and Château-Thierry launched a counter-assault against the German positions. Allied Généralissime Ferdinand Foch directed the allied attack. This assault on a 25-mile wide front was the first in more than a year. The American army fought for the regions around Soissons and Château-Thierry, in collaboration with predominantly French forces. The allied forces had managed to keep their plans a secret, and their attack at 04:45 took the Germans by surprise when the troops went "Over the Top" without a preparatory artillery bombardment. Instead, they followed closely behind a rolling barrage which began with greatly synchronized precision. Eventually, the two opposing assaults inter-penetrated and individual American units exercised initiative and continued fighting despite being nominally behind enemy lines.