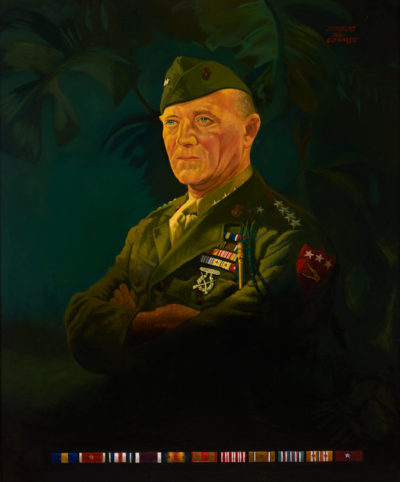 
From 1987: The Army and Navy Club, gift of Constance Erskine


General Erskine led the 3rd Marine Division during the Battle of Iwo Jima in World War II. He had fought in World War I at Chateau-Thierry, Belleau Wood, Bouresches, and Soissons, where he was seriously wounded and awarded the Silver Star. He became Commanding General, Fleet Marine Force, Atlantic in 1951. Erskine was authorized to retire from active duty by a Special Act of Congress in June 1953 in order to accept the position of Assistant to the Secretary of Defense as Director of Special Operations. He served three Secretaries of Defense in that position until 1961. He was President of The Army and Navy Club in 1963. He is buried at Arlington National Cemetery, Section 5.