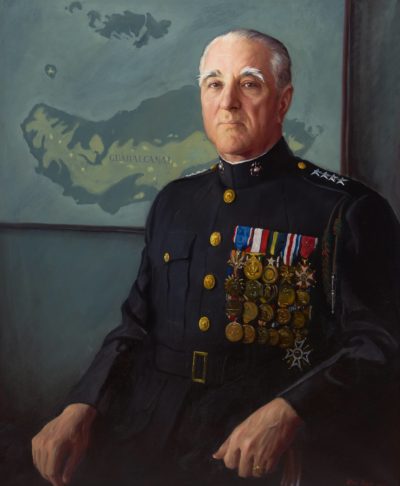 
General Thomas enlisted in the Marine Corps in 1917. During World War I, he saw action with the 6th Marines at Verdun and Champagne, and led a Marine squad in Belleau Wood and Soissons. He was awarded the Silver Star for valor, and the Purple Heart for wounds received in battle. Following the Great War, he fought with the 1st Marine Division at Guadalcanal and Tulagi in 1942. In 1947 he was named Commanding General of Fleet Marine Force, Western Pacific. Later, he commanded the 1st Marine Division during the Korean War and received the Army Distinguished Service Cross and Army Distinguished Service Medal. He served as Assistant Commandant, U.S. Marine Corps and later as Commandant, Marine Corps Schools, Quantico. He was President of The Army and Navy Club twice, in 1955 and 1971. He is buried in Arlington National Cemetery.