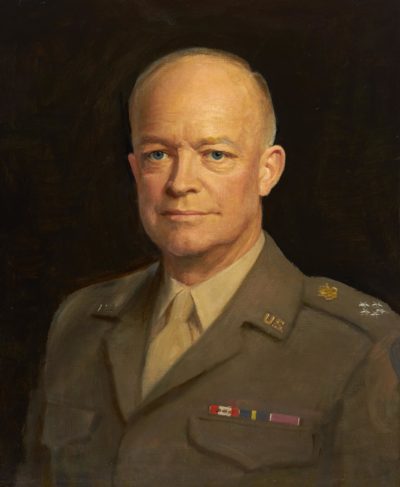 
General Eisenhower was responsible for planning the 1942 invasion of North Africa, called Operation Torch, and the 1944 invasion of France and Germany. He was the Supreme Commander of Allied Forces in Europe and became the first Supreme Commander of the North Atlantic Treaty Organization (NATO) in 1951. He was the Army Chief of Staff before retiring to be the President of Columbia University in 1948. He served as the 34th President of the United States from 1953-1961. General Eisenhower was a member of The Army and Navy Club.

This portrait was donated to the Club by Colonel Richard C. Snyder USAF, in memory of his father, Major General Howard McCrum Snyder, who was Eisenhower’s personal physician from 1946 to 1969.