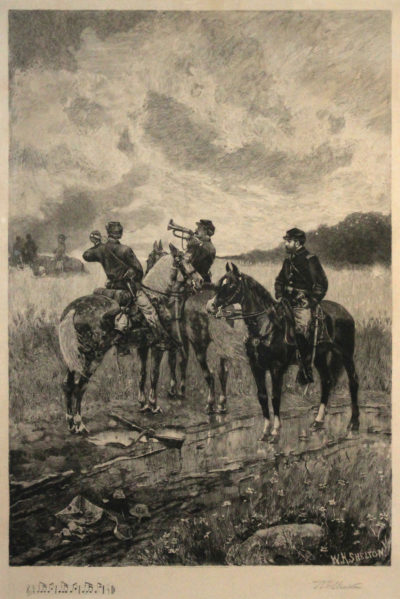 
The image depicts Union soldiers from the American Civil War sounding the bugle. In the bottom of left-hand corner of the image the artist included a musical measure indicating that the specific bugle call depicted by the scene is the "Officer's Call," which is given to alert the unit’s officers to assemble around the Commander.

The artist, William Henry Shelton, served during the Civil War in the 1st New York Light Artillery Regiment. He was an artillery commander at the Battle of the Wilderness, where he was badly wounded and taken prisoner by the Confederates.

After the war he forged a career as an artist and illustrator in New York City, where he was published in most major periodicals of the day, including Frank Leslie’s Illustrated, Harper’s Weekly, Century, and the New York Ledger. A master engraver, he exhibited at the Brooklyn Art Association, the Boston Art Club, the Pennsylvania Academy, and the Art Institute of Chicago. His etchings and drawings from the Civil War were based on his real experiences and memories.