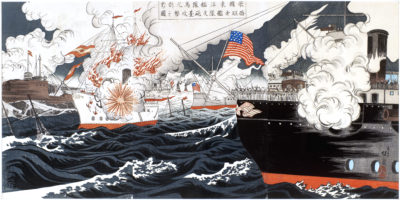 
From 1962:
The Army and Navy Club, gift of Carl Boehringer


Japan underwent a political, social, and industrial revolution in 1867. It quickly transformed from an isolationist feudal state to a capitalist, imperial world power.

Depictions of war became popular among the Japanese, who were then involved in the Sino-Japanese and Russo-Japanese Wars. As evidenced by this print, major world news like the Spanish-American War also made its way into ukiyo-e prints.

This scene depicts the Battle of Manila, May 1, 1898, and features the flagship USS Olympia under the command of Rear Admiral George Dewey.