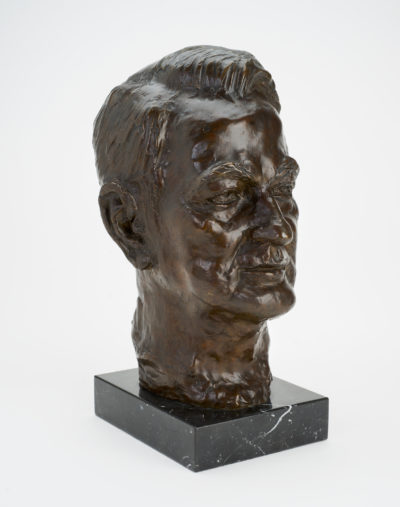 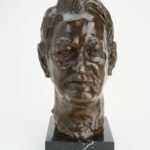 
From ca. 1990: The Army and Navy Club, acquired from Felix de Weldon


Admiral Arleigh A. Burke was a battle-decorated Chief of Naval Operations whose combat exploits against Japanese naval forces in the South Pacific made him the Navy's most celebrated destroyer squadron commander of World War II. As a Captain in the South Pacific, He was known as "31 Knot Burke," a nickname supplied by Admiral William F. Halsey, for his exploits as the commander of Squadron 23, a pack of eight destroyers that staged high-speed torpedo attacks that devastated enemy warships in the Solomon Islands in late 1943 and early 1944. (The nickname was originally a taunt, due to a burst boiler casualty that limited his squadron to 31 knots, rather than the 34+ knots that they were otherwise capable of achieving). In 22 engagements from November 1943 to February 1944, Capt. Burke's squadron was credited with sinking one cruiser, nine destroyers, one submarine and nine smaller ships, as well as downing approximately 30 aircraft.

In 1955, Burke was selected by President Eisenhower over 92 more senior officers to be Chief of Naval Operations. He served three two-year terms—a record tenure as the Chief of Naval Operations—but insisted on retiring in 1961, when President John F. Kennedy offered him a fourth term. Burke was a member of the United Nations truce negotiations team in the Korean War and in Washington became a strong advocate of a powerful nuclear fleet for the Navy, including its missile-launching Polaris submarines. Admiral Burke was a member of the Army and Navy Club.