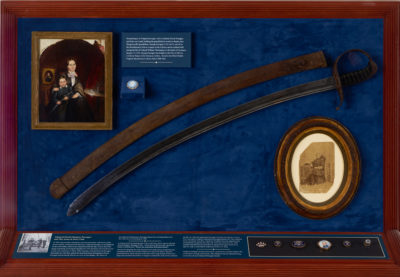 
From 2012: The Army and Navy Club, gift of Colonel Newton Farragut McCurdey Jr.


Father of Admiral David Farragut, George Farragut (1755-1817) was a Menorcan-born American naval officer during the American Revolutionary War. He also fought with the Continental infantry in battles in the South. After commanding a Spanish trading ship in the Gulf of Mexico and Caribbean, he had joined the South Caroline Navy as a lieutenant when the war broke out. He anglicized his Catalan name to George Farragut when he joined the Navy. His sword is the Third Model, Virginia Manufactory Cavalry Saber 1808-1821.