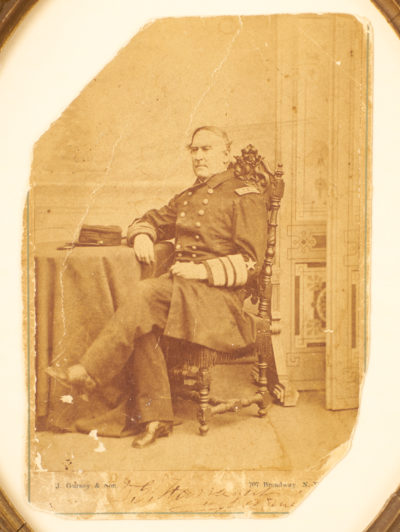 
From 2012: The Army and Navy Club, gift of Colonel Newton Farragut McCurdey Jr.


In 2012, Club member Colonel Newton Farragut McCurdey Jr. (USA Ret.) gifted a collection of historical items belonging to Civil War hero Admiral David Farragut and his family. These personal artifacts joined the Club’s already considerable collection of work related to Admiral Farragut, including an 1891 portrait painted by Jerome Uhl and a painting of Farragut’s flagship the USS Hartford. Today, these items are all on permanent display in the Club lobby.

The statue of Admiral Farragut, which graces Farragut Square, has stood guardian over the Club since its founding in 1885.

Gurney and Son, a New York photography studio in the late 19th century, took this portrait of Admiral Farragut (1801-1870), known for his order during the Battle of Mobile Bay: “Damn the torpedoes, full speed ahead.”

Aboard his flagship the USS Hartford and under heavy bombardment, Farragut took the port of New Orleans on April 29, 1862, a decisive achievement in naval warfare at the time when superiority of forts over ships was asserted everywhere. Congress created the rank of rear admiral on July 16, 1862, and appointed Farragut to honor his superior service. Two years later, Congress authorized the appointment of a Vice Admiral from among the nine Rear Admirals. President Lincoln signed it and nominated Farragut for the office the next day, December 21, 1864. Another bill allowed the president to appoint Farragut an Admiral on July 25, 1866, a rank previously unknown in the US Navy.