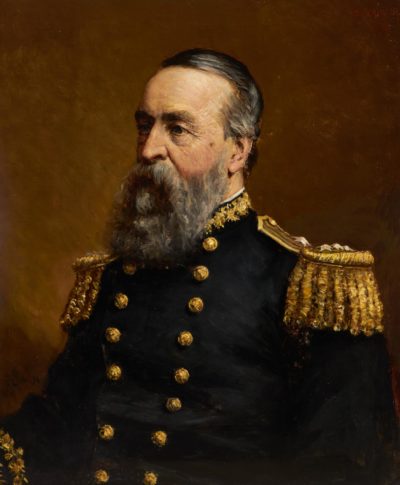 Credit line:
Gift of Navy Members of the Army and Navy Club


From 1891: The Army and Navy Club, gift of its Navy members


Admiral Porter first set sail at age ten with his father, Commodore David Porter, against pirates in the West Indies. Porter served in the Mexican-American War during the Battle of Veracruz (1847). He commanded a flotilla of mortar boats in the Civil War at the capture of New Orleans. Admiral Porter is credited with laying the foundation for U.S. naval victories during the Spanish-American War. After the Civil War, he served as the Superintendent of the U.S. Naval Academy in Annapolis, Maryland and became the second U.S. Navy officer to attain the rank of Admiral, after David G. Farragut. His son Theodoric became a Commodore; his grandson David D. Porter was a Marine general.