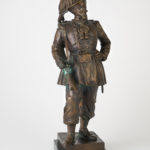 
From April 4, 1966: To Admiral Charles Griffin, from Roberto Tremelloni, Defense Minister of the Italian Republic


The sculpture is of a soldier of the Bersagliere (“marksmen” in English), a corps of the Italian Army originally organized by General Alessandro La Marmora in 1836 to serve in the Army of the Kingdom of Sardinia, later to become the Royal Italian Army. They have always been a high-mobility light infantry unit. They are still recognized by their distinctive wide brimmed hats (worn only in dress uniform today), decorated with black capercaillie feathers. The feathers are usually applied to their combat helmets. Another distinctive trait of the Bersaglieri is the fast jog pace they maintain on parade, instead of marching.

Translated from Italian, the label of this sculpture reads: “To Admiral Charles Griffin. [From] The Defense Minister of the Italian Republic, Roberto Tremelloni. Rome, 4 April 1966.”

There are four other sculptures similar to this one in the collection of The Army and Navy Club (accession numbers 1966.01-1966.05), each one representing a different type of soldier in the 19th century Royal Italian Army. They were owned by Charles Griffin and gifted by him to the Club. Admiral Charles Griffin USN was a member of The Army and Navy Club in his retirement (retired 1968).