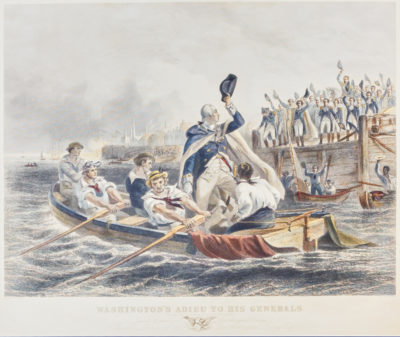 
This is a spirited depiction of General George Washington leaving Whitehall Ferry on December 4, 1783, to the cheers and waves of his officers. Earlier that day, Washington left his fellow generals, Knox, Steuben, Greene, and then-Colonel Hamilton, among countless others, at New York's famed Francis Tavern, to the tune of "Roslin Castle." After a mournful and heavy goodbye with those who had sat on his council, shared in his toils and adversaries for seven years, Washington arrived at the New York barge and departed for Annapolis.

Darley's idealized depiction of the dock, filled with American sailors and enthusiastic officers, captures the sentiments expressed by a nation exhausted by war but optimistic for the future of the country. In Annapolis, General Washington met with Congress to surrender his commission as Commander-in-Chief, with the following words: "Having now finished the work assigned me, I retire from the great theater of action, and bidding an affectionate farewell to this august body, under whose orders I have so long acted, I here offer my commission, and take leave of all the employments of life."

This image is one of a pair of prints on display in The Club’s Washington Room—the other, titled “Washington and His Generals,” depicts Washington surrounded by his generals at Fraunces Tavern prior to embarking for Whitehall Ferry (see it here). Together, they describe the events of Washington’s fabled last day as an American military officer (until he became the Commander in Chief six years later).