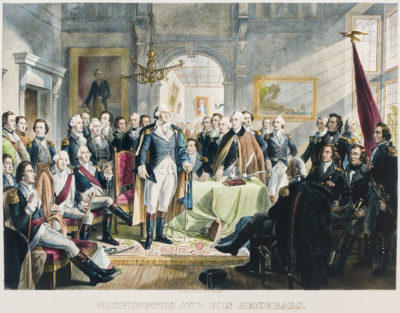 
A depiction of General George Washington with his fellow Generals of the Continental Army. Among them are Henry Knox, Baron von Steuben, Nathanael Greene, and Colonel Alexander Hamilton.

This scene appears to be a fanciful view of George Washington's famous farewell to his officers at Fraunces Tavern in New York City following the Revolutionary War. On December 4, 1783, before returning to private life after the evacuation of the British from New York, Washington said farewell to his officers in the Long Room of Fraunces Tavern and immediately departed by barge from Whitehall Ferry at the Battery in Lower Manhattan.

This image is one of a pair of prints on display in The Club’s Washington Room—the other, titled “Washington’s Adieu to His Generals,” depicts Washington leaving Whitehall Ferry (see it here). Together, they describe the events of Washington’s fabled last day as an American military officer (until he became the Commander in Chief six years later).

Artist and engraver Alexander Hay Ritchie moved to the United States from his native Scotland in 1841, settling in New York, where he had a successful career as an artist, created engravings, mezzotints, and etchings of chiefly historical or allegorical subjects. This print was made after his own painting. The figure of Washington seems to be adapted from the full-length statue by the sculptor Jean-Antoine Houdon in the State Capitol at Richmond, Virginia. A historic replica of the Houdon portrait bust of Washington is also on display in the Washington Room (see it here).