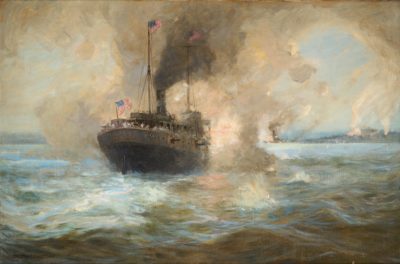 
From 1912: The Army and Navy Club, gift of Admiral Willard H. Brownson


USS Yankee was originally El Norte, a steamer built in 1892 by the Newport News Shipbuilding & Drydock Co. for the Southern Pacific Railroad's Morgan Line. During the Spanish-American War, the ship was acquired by the U.S. Navy from the Southern Pacific Company on April 6, 1898, renamed and commissioned at New York on April 14, with Commander Willard H. Brownson (1845-1935) in command. She took a southerly course to meet the fleet off Cuba, joining the blockade off Santiago de Cuba. She proceeded to Cienfuegos on June 13 and patrolled the harbor for two days. It was there that the successful encounter, depicted here, led to Spanish warships retreating to the harbor. Yankee then put into the naval anchorage at Guantanamo Bay to take on coal and other provisions before rejoining the blockade at Cienfuegos.

Though not known for certain, it is likely that Admiral Brownson, who was a Club member and who donated the painting, commissioned it specifically for The Army and Navy Club.