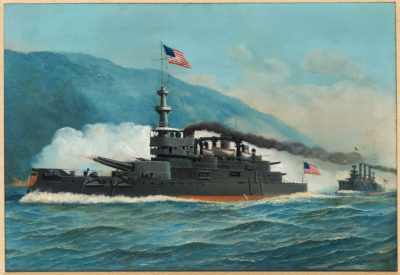 
USS Oregon (BB-3) was a pre-dreadnought Indiana-class battleship of the U.S. Navy, commissioned on July 15, 1896. She served in The Spanish American War, the Philippine American War, Boxer Rebellion, and the Siberian Intervention.

In 1898, Oregon was ordered on a voyage around South America to the East Coast in preparation for war with Spain. She reached Jupiter Inlet in 66 days, a journey of 14,000 nautical miles, a remarkable achievement at the time. The journey popularized the ship with the American public and demonstrated the need for a shorter route, which led to construction of the Panama Canal. She took part in the Battle of Santiago de Cuba that same year, where she and the cruiser Brooklyn were the only ships fast enough to chase down the Spanish cruiser Cristóbal Colón, forcing its surrender. She received the nickname "Bulldog of the Navy," most likely because of her high bow wave—known as "having a bone in her teeth" in nautical slang—and perseverance throughout her demanding missions.