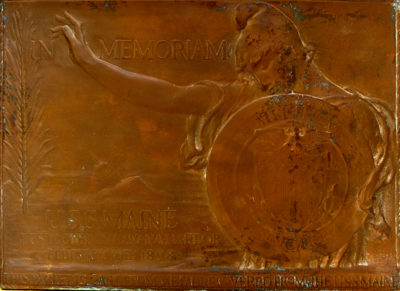 
1913: Cast from metal that had been salvaged from the USS Maine after it was raised in Havana harbor the previous year.

From ca. 1986-1998:
Naval Historical Center (redesignated as the Naval History and Heritage Command in 2008)


Sent to protect U.S. interests during the Cuban revolt against Spain, USS Maine exploded suddenly and without warning on February 15, 1898, sinking quickly and killing nearly three quarters of her crew. The cause and responsibility for her sinking remained unclear after a board of inquiry investigated. Nevertheless, popular opinion in the U.S., fanned by inflammatory articles printed in the "yellow press" by William Randolph Hearst and Joseph Pulitzer, blamed Spain. The phrase, "Remember the Maine! To hell with Spain!", became a rallying cry for action, which came with the Spanish–American War later that year. While the sinking of Maine was not a direct cause for action, it served as a catalyst, accelerating the approach to a diplomatic impasse between the U.S. and Spain. The cause of Maine’s sinking remains the subject of speculation to this day.

This commemorative plaque was cast from metal that was salvaged from the Maine after it was raised by U.S. Army engineers in Havana harbor in 1912. Over one thousand are said to have been produced. It reads: “USS Maine. Destroyed in Havana Harbor. February 15, 1898. This tablet is cast from metal recovered from the USS Maine.”

The plaques were intended for survivors and families of those lost. The Maine was commanded by then-Captain Charles Dwight Sigsbee, a member of The Army and Navy Club. As a Rear Admiral in 1905, Admiral Sigsbee commanded the ceremonial Task Force that sailed to France to recover the remains of John Paul Jones and bring them home for interment at the US Naval Academy at Annapolis. The plaque, which is exhibited in the Daiquiri Lounge, was donated to the Club by Commander Sumner K. Moore (USNA 1948), a fourth generation Army and Navy Club member and the great, great grandson of Admiral Sigsbee. The Club's portrait of Admiral Sigsbee is exhibited in the Club Ballroom.