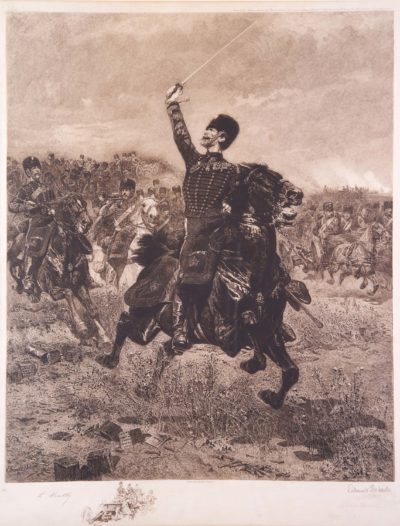 
This impressive etching depicts a cavalry charge of the mounted artillery regiment of the French Imperial Guard in Battery. Based off an original 1890 painting by Jean-Baptiste Édouard Detaille, a French academic painter and renowned military artist, it is likely a scene from the Franco-Prussian Wars.

Detaille, noted for his precision and realistic detail of cavalry, was regarded as the semi-official artist of the French Army around the turn of the 20th century. He also played a key role in founding France’s national military museum, Musée de l'Armée, bequeathing his own renowned collections of weapons, armor, artillery models and military art.

The etcher, Charles Louis Kratke (1848-1921), was a renowned artist in his own right, who left a successful painting career to study etching. Kratke’s plates are regarded for their pure, conscientious etching and careful translation of the original paintings after which he worked.

The etching was produced in October 1891 by printers Boussod, Valadon & Co., and hand signed by both Kratke and Detaille. The original painting resides in the Musée de l'Armée in Paris.