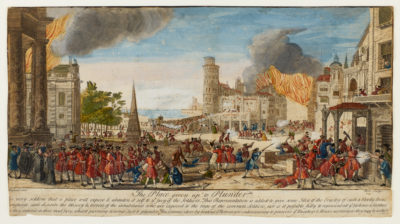 
Created during an era of nearly constant English and European warfare, this historic print is a cautionary tale of the violence and destruction of war wrought upon the common citizen. The inscription beneath the print reads:

“Tis very seldom that a place will expose and abandon itself to the fury of the soldiers. This representation is added to give some idea of the cruelty of such a bloody scene. Language can’t describe the misery and terrors of the inhabitants who are exposed to the rage of the common soldiers, nor is it possible fully to represent all the violence and barbarism they commit in their mad fury, whilst pursuing revenge, lust and plunder. The Commanders by beating a retreat are endeavoring to preserve the burghers and houses according as they may be useful…”

This print was hand-colored.