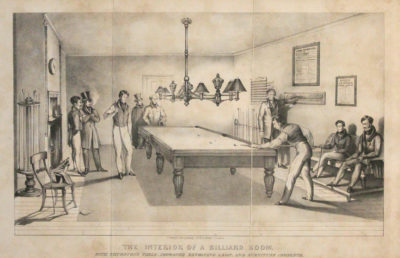 
From December 1996,
The Army and Navy Club, gift of Thomas Pike and Bruce Klappa


Beneath the illustration, the script reads: “With Thurston’s Table, Improved Revolving Lamp and Furniture Complete.”

Thurston Billiards Manufacturers was established in 1799 by John Thurston. It is considered by many to be the father of the modern snooker table. In 1892 the Billiard Association of Great Britain and Ireland accepted a Thurston billiard table as the standard, which all manufacturers have since followed.

Interesting “pool hall” trivia: Thurston supplied the billiard table to Longwood House on St. Helena, a remote volcanic outpost in the South Atlantic Ocean. Napoleon Bonaparte lived out the last years of his life in exile there after his defeat at Waterloo. Evidently, he enjoyed an occasional game of billiards (although he is said to have been quite a bad player).