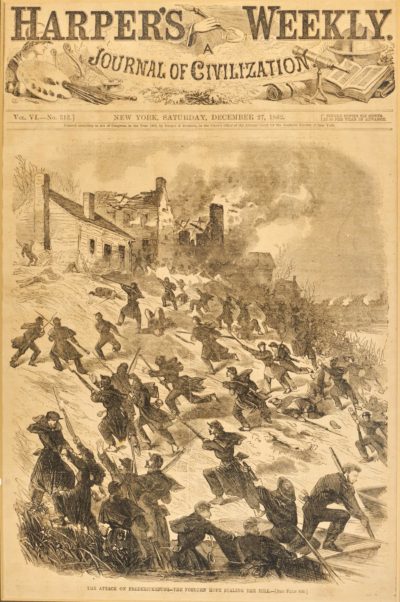 
Harper's Weekly, A Journal of Civilization was an American political magazine based in New York City. Published by Harper & Brothers from 1857-1916, it featured foreign and domestic news, fiction, essays on many subjects, and humor, alongside illustrations. It is perhaps best remembered for carrying extensive coverage of the Civil War, including many illustrations of events from the war, like this example.

This illustration depicts the Union Army's futile frontal attacks on December 13 against entrenched Confederate defenders on the heights behind the city of Fredericksburg, remembered as one of the most one-sided battles of the war, with Union casualties more than three times as heavy as those suffered by the Confederates. A visitor to the battlefield described the battle to President Abraham Lincoln as a "butchery."