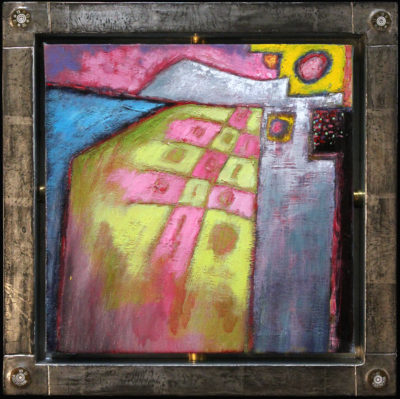 
Lieutenant Colonel David Richardson is an artist who is known for his abstract style and use of vibrant colors and bold geometric themes inspired by Homer’s Iliad. While his paintings have hints of military inspiration and symbolism, he has said, “I want to create something beautiful. To me, there are enough disturbing and ironic things in life.”

From Waterford, Michigan, Richardson was taught to draw and paint at an early age by his mother, an artist and teacher.  Richardson studied biology and art while attending Harding College in Searcy, Arkansas.  Although his primary medium is oil, he also works in acrylic and metal. A collection of his works, titled the Shotgun Paintings, were exhibited at The Army and Navy Club in March 2017. It was the first contemporary exhibition of a living military artist in the Club’s history.

The frame, by Gold Leaf Studios, was designed for the painting in the Roman tradition of military trophy frames.