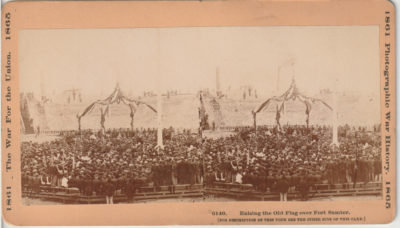 
verso: 6140. Raising the Old Flag over Fort Sumter.
April 14, 1865 (four years from the day the Rebels had compelled Major Anderson to haul down the stars and stripes from the flag-staff at Fort Sumter), Major General Anderson raised the same flag over the ruins of the Fort, now again in possession of the United States. The ceremony was of most intense interest. Charleston Hrabor was filled with Uncle Sam's vessels covered with holiday flags. Great crowds thronged Fort Sumter. Henry Ward Beecher delivered the oration. At a given signal, amid booming cannon, and with the bands playing the Star Spangled Banner, Major General Robert Anderson ran up to the glorious old flag, and ran it up to stay; a perpetual menace to treason from within, or foreign enemies from without. "Long shall it wave."
1861—Photographic History.—1865
This series of pictures are original photographs taken during the war of the Rebellion. More than a quarter of a century has passed away since the sun painted these real scenes of that great war, and the “negatives” (made by the old “wet plate” process) have undergone chemical changes which renders it slow and difficult work to get “prints” from them. Of course no more “negatives” can be made, as the scenes represented by this series of war views have passed away forever. The great value of these pictures is apparent. Some “negatives” are entirely past printing from, and all of them are very slow printers.
A Word As To Prices.
A gentleman living near Watkins Glen, New York, wrote us that he thought 30 cents each, too high a price for the stereoscopic war views, as he could buy views of Watkins Glen for $1.50 per dozen. We wrote him to this effect:
“If there was but one negative of Watkins Glen in existence, and if Watkins Glen itself were entirely wiped off the face of the earth, and if this one negative was old and ‘dense’ and very slow to ‘print,’ and if all the people of this country were as much interested in a view of Watkins Glen as they are in seeing the real scenes of our great war, so faithfully reproduced, then, and only under such circumstances, should Watkins Glen Pictures be compared to photographs taken ‘at the front’ during the days of 1861 to 1865.”
The gentleman “acknowledged the corn,” took the war views he wished for, paid the reasonable price asked for them, and was satisfied.
The above is the only answer we shall ever make to the question of price. We deem it necessary to say this much, as many persons write and ask us for cheap war views; when we change the price of these war views, it will be to double it; they will never be any cheaper than now. They can be obtained only of the undersigned or our duly authorized agents.
If you wish for a catalogue of the war views, send a stamp and your address to
Yours in F. C. and L.,
The War Photograph & Exhibition Company,
Sole Owners of the Original War Views. No. 21 Linden Place, Hartford, Conn.