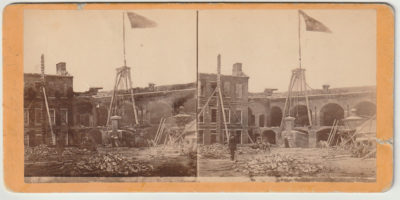 
verso: No. 27
Interior View of Fort Sumter, at Charleston, S.C.,
Showing the Jury Flag Staff Erected by Gen. Anderson
This view of Fort Sumter was taken days after its surrender by Gen. Anderson on the 14th of April 1861. The Jury Flag Staff, erected by Gen. Anderson, and the original Flag Staff as shot away by the Confederates, can be seen. The Jury Flag Staff was erected on the derrick used for hoisting heavy ordnance. The building to the right was a portion of the barracks and hospital. The casemates on the left, or front of the picture, were used, after the occupation of the Fort by the Confederates, as officers’ quarters. Immediately in front of the July Flag Staff can be seen the hot shot furnace. On Saturday afternoon, the 13th of April, the second day of the bombardment, after the terms of surrender had been agreed upon between Gen. Anderson and Gen. Beauregard, two fire engines were sent to Fort Sumter from Charleston, to subdue the flames. They remained at the Fort for several days. On Sunday morning, the 14th of April, a full surrender of the Fort was made, the Federal forces being allowed to salute the “Old Flag” as it was hauled down. Gen. Anderson and his command embarked on board the steamer Isabel, which vessel conveyed them to the steamer Baltic lying outside the bar, from whence they departed for New York the following day. It is almost incredible to relate, yet it is true, that no life was lost on either side during the bombardment. An unfortunate casualty, which resulted in the loss of life, occurred by the premature discharge of a cannon, whilst the garrison were engaged in saluting the flag, on its being hauled down to give place to the Confederate flag. Daniel Howe, one of the victims of this casualty, was killed instantly. He was buried that day in the center of the Parade Ground, the Rev. Wm. B. Yates, Seamen’s Chaplain of Charleston, officiating. Whilst the grave was being prepared, Gen. Anderson, who was standing near Mr. Yates, turned to him (Mr. Yates) and said that he felt it his duty to inform him that the Magazine of the Fort might explode at any moment. Mr. Yates replied that he was in the performance of a solemn duty, and would remain. Gen. Anderson, in reply, remarked that he would ever appreciate hi kindness, and remained a witness to the ceremonies. The other victims of the casualty were—Edward Galway, who was mortally wounded, and died in Broad Street on his way to the Trapmann Street hospital; James Hayes, George Fielding, John Irwin and George Pritchard, severely wounded. The four latter were taken to the Baltic with their command. They all belonged to Company E, First Regiment United States Artillery. It may be well to state that Gen. Beauregard refused to receive Gen. Anderson’s sword at the surrender of Fort Sumter. On the other hand, Gen. Beauregard complimented Gen. Anderson and his men on the gallant and heroic defence they had made. The first Palmetto flag was raised on Fort Sumter by F. J. Moses, Jr., the present Speaker of the House of Representatives of South Carolina.
Published by Quinby & Co., 261 King Street, Charleston, S.C.