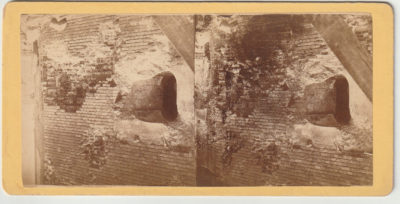 
verso: No. 31.
South Angle of Fort Sumter
Charleston, S.C.
This picture represents the South Angle of Fort Sumter; it also shows the port-hole from whence the first shot was fired from the Fort, upon Stevens' Iron Battery on Cumming's Point, Morris Island. Afterwards Batteries Gregg and Wagner were constructed on and near the site. This angle of the Fort was subjected to a heavy fire from Stevens' Iron Battery, as shown by the picture. Stevens' Battery was constructed upon plans furnished by Major C.H. Stevens, (afterwards Colonel,) a citizen of Charleston, and built under his personal supervision. It was covered with railroad iron, of several thicknesses, which made it impenetrable to the shot from Sumter. Its heavy armament, consisting of Dahlgren's and 64-pounders, together with its close proximity to Sumter, enabled it to do much execution. A breach was made in this angle of the Fort during the afternoon of the first day's bombardment. It was from Stevens' Battery, and on this angle of the Fort, that Edmund Ruffin, of Virginia, discharged a gun, being the first fired from the Battery.
Published by S. T. Souder, 263 King Street, Charleston, S.C.