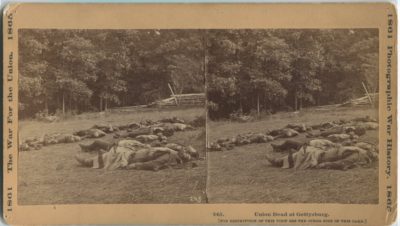 
recto: 1861 The War For the Union. 1865
1861 Photographic War History. 1865
245. Union dead at Gettysburg. (For description of this view see the other side of this card.)
verso: 245. Union dead at Gettysburg.
This group of dead was in “The Wheatfield.” The burial details found many such groups on that terrible field. The work of burying the thousands of dead was a Herculean task in itself. The hot July sun made it imperative that the dead should be placed underground as soon as possible. In some cases a little mound of earth was heaped over the bodies as they lay, and after the first rain storm the hands and feet of the dead could be seen sticking out from their covering of earth.
1861—Photographic History.—1865
This series of pictures are original photographs taken during the war of the Rebellion. More than a quarter of a century has passed away since the sun painted these real scenes of that great war, and the “negatives” (made by the old “wet plate” process) have undergone chemical changes which renders it slow and difficult work to get “prints” from them. Of course no more “negatives” can be made, as the scenes represented by this series of war views have passed away forever. The great value of these pictures is apparent. Some “negatives” are entirely past printing from, and all of them are very slow printers.
A Word As To Prices.
A gentleman living near Watkins Glen, New York, wrote us that he thought 30 cents each, too high a price for the stereoscopic war views, as he could buy views of Watkins Glen for $1.50 per dozen. We wrote him to this effect:
“If there was but one negative of Watkins Glen in existence, and if Watkins Glen itself were entirely wiped off the face of the earth, and if this one negative was old and ‘dense’ and very slow to ‘print,’ and if all the people of this country were as much interested in a view of Watkins Glen as they are in seeing the real scenes of our great war, so faithfully reproduced, then, and only under such circumstances, should Watkins Glen Pictures be compared to photographs taken ‘at the front’ during the days of 1861 to 1865.”
The gentleman “acknowledged the corn,” took the war views he wished for, paid the reasonable price asked for them, and was satisfied.
The above is the only answer we shall ever make to the question of price. We deem it necessary to say this much, as many persons write and ask us for cheap war views; when we change the price of these war views, it will be to double it; they will never be any cheaper than now. They can be obtained only of the undersigned or our duly authorized agents.
If you wish for a catalogue of the war views, send a stamp and your address to
Yours in F. C. and L.,
The War Photograph & Exhibition Company,
Sole Owners of the Original War Views. No. 21 Linden Place, Hartford, Conn.
[There is one duplicate stereograph of 245. Union dead at Gettysburg.]