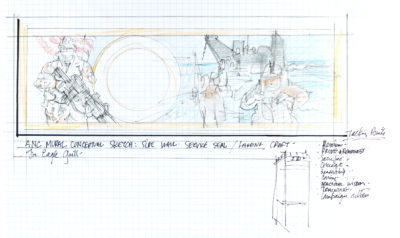 
This drawing of Navy Seals exiting a landing craft over an unfinished sketch of a service seal is one of seven mural sketches by William Woodward, commissioned by the Club for the Eagle Grill to commemorate the many military personnel who have sacrificed their lives during recent conflicts in the Middle East.