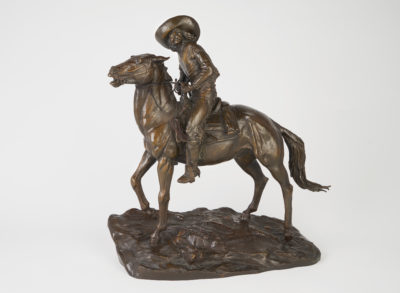 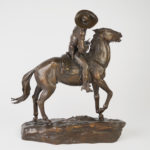 
From 2002: The Army and Navy Club, gift of Major William J. Lang, from the New Rochelle Collection


This sculpture depicts a scout for the U.S. cavalry on horseback, ca. late 19th century.

Frederic Remington cast twenty-two different subjects of his renowned and highly coveted bronzes depicting romanticized images of the American West. The first foundry with which he worked was the Henry-Bonnard Bronze Company in New York. There he cast four sculptures: The Bronco Buster, Wounded Bunkie, Wicked Pony, and Scalp. In 1900 he began working exclusively with Roman Bronze Works, New York. Remington’s wife authorized the foundry to continue casting Remington’s bronzes until her own death in 1918. Remington sculptures are “full round,” meaning they are as realistically sculpted in the back as in front.

Remington bronzes are among the most widely reproduced of all metal sculptures. Some unauthorized copies of his work have been traced as far back as 1920. However, when the copyright protection of his work expired in the 1960s, the number of reproductions in the market increased exponentially.