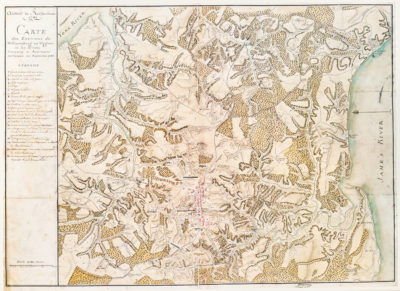 
From 1989: The Army and Navy Club, gift of Thomas McGrath


This topographic map of the Williamsburg, Virginia, area was made in 1782 by Jean Nicolas Desandrouins, a French army engineer and cartographer, shortly after the October 1781 Battle of Yorktown during the Revolutionary War. It shows the encampments and positions of the French and American forces from that September, on the eve of the battle. The map provides a detailed plan of the Williamsburg area, with the location of estates, towns, and other significant sites. It shows houses and public buildings in Williamsburg, plantations in the countryside, roads, creeks, ferries, mills, and even provides the names of some local residents.

A numbered key identifies military units, public buildings, and other points of interest. The map is oriented with north to the left. Scale is given in toises, an old French unit measuring almost 1.95 meters.

Yorktown, the last major land battle of the Revolutionary War, ended with the surrender of the British army under Lord Cornwallis to the combined French and American force and ultimately led to the Treaty of Paris of 1783 and British recognition of American independence. The map is from the Rochambeau Collection at the Library of Congress, which consists of 40 manuscript maps, 26 printed maps, and a manuscript atlas that belonged to Jean-Baptiste-Donatien de Vimeur, comte de Rochambeau (1725‒1807), commander in chief of the French expeditionary army (1780‒82) during the American Revolution.