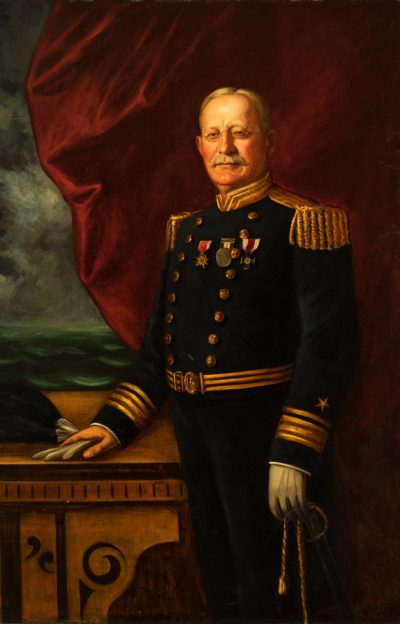 
Admiral Sigsbee served in the Civil War under Admiral David Dixon Porter, whose portrait hangs in the second-floor parade of the Club. He was Captain of the USS Maine when it exploded in Havana Harbor on February 12, 1898, triggering the Spanish-American War. When Army engineers raised the Maine, they cut apart the armor plating and shaped it into memorial pieces for family members of the Maine's sailors and Marines. Admiral Sigsbee later commanded the Naval Task Force that returned the remains of John Paul Jones from France to the U.S. Naval Academy. Admiral Sigsbee was a Club member, as were several generations of his descendants. Commander Sumner K. Moore (fourth generation Club member) donated the armor plating from the USS Maine that hangs on the Daiquiri Lounge west wall. Admiral Sigsbee is buried in Arlington National Cemetery, Section 2.