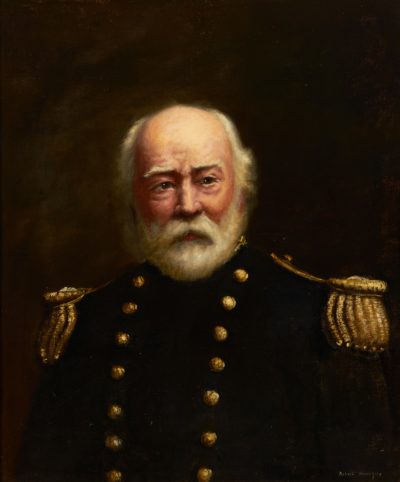 
Rear Admiral Augustus Case was a member of the 1837-1842 Wilkes Expedition, the surveying expedition that explored the Pacific Ocean and discovered Antarctica. During the Mexican-American War (1846-1848), Case blocked the escape of General Santa Ana by holding the town of Palisada with just twenty-five men for two weeks against the Mexican cavalry.

During the Civil War (1861-1865) Case served as Fleet Captain of the North Atlantic Blockading Squadron in its capture of Forts Clark and Hatteras in August 1861. He commanded the Iroquois in the blockade of New Inlet, North Carolina. Later he was Chief of the Bureau of Ordnance (1869–1873), attaining the rank of Rear Admiral in 1872. Case commanded the European Squadron for two years before retiring from the Navy in 1875. He joined The Army and Navy Club in 1890.