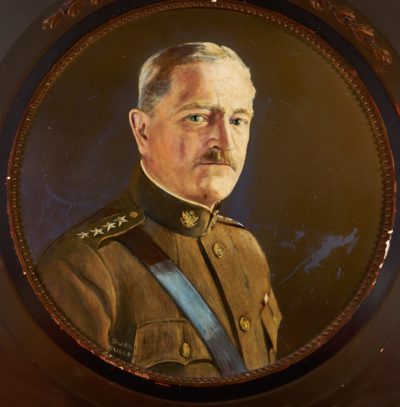 
This is a rare portrait by the painter and muralist Buell Mullen. According to her September 10, 1986 obituary in The New York Times:

“Mrs. Mullen developed a process for painting on metal, including stainless steel, aluminum, chromium, copper and gold… The metal method was evolved through eight years of rigorous experimentation. Using a surface prepared by etching and acid, she learned to accomplish a sound union between the metals and oil paints.

“In 1940, Mrs. Mullen moved to New York, where she continued her work, completing a number of murals for various organizations including the United States Naval Academy; the ITT Tower; the Great Lakes Naval Training Station; the Chase Manhattan Bank, and the Republic Steel Corporation.”

It is in New York that Mullen likely painted this portrait of General Pershing. As a portrait painter, her subjects also include President Eisenhower, Jacqueline Cochran, General George C. Marshall, Eugene Ormandy, Nelson Eddy, and Mme. Chiang Kai-Shek. Mullen was a United States representative to UNESCO from 1970 to 1974. She served as president of the Mural Painters Society and was a Fellow of London's Royal Society of Arts.