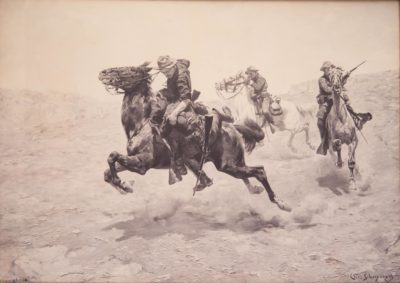 
This is a reproduction of a color oil painting in the collection of the Metropolitan Museum of Art in New York City. Schreyvogel, like his contemporary Frederic Remington, based his portrayals of cowboys and cavalrymen on escapist fantasies of the “wild west.” He made frequent visits to the western states and territories, collecting artifacts for the authentically detailed paintings he produced in his Hoboken, New Jersey studio. "My Bunkie" portrays an event described to Schreyvogel by a veteran frontier trooper he met in Colorado. In the heat of a violent conflict on the plains, a soldier heroically rescues a bunkmate who has lost his mount in a skirmish with unseen Indians. When the painting was exhibited in New York in 1900, it elicited comparisons to Remington’s sculpture, "Wounded Bunkie," with its shared codes of comradeship and dynamic animation.