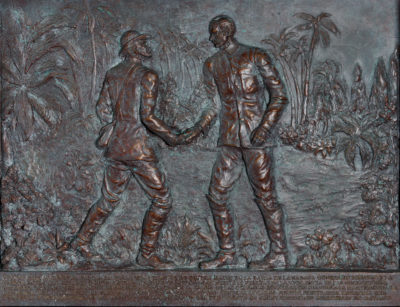 
On the morning of Friday, April 8, 1898, President William McKinley asked Army Colonel Arthur Wagner, Head of the Bureau of Military Intelligence, “Where can I find a man who can carry a message to Garcia?” The “Garcia” to whom he referred was General Calixto Garcia, a leader of Cuban Independence from Spain.

“There is a young lieutenant named Rowan here in Washington who will take it,” said Colonel Wagner, to which the President replied “Send him!”

Wagner arranged to meet Lieutenant Andrew Rowan for lunch that afternoon at The Army and Navy Club (both were Club members), where their discussion of the President’s mission to get a message to Cuba concluded with Wagner directing Rowan to “Get that message to Garcia!”

Rowan’s accomplishment 22 days later, made famous in Elbert Hubbard’s inspirational essay, Message to Garcia, is commemorated on this Bas relief, commissioned by the Garcia Monument Committee in 1956. The event is now legendary, a sort of allegory for the rare virtue of reliable, competent workers who follow instructions without needless questions, work diligently without supervision, take initiative to overcome obstacles and, with persistence, complete assignments promptly.

Rowan died in 1943. He is buried in Arlington National Cemetery.