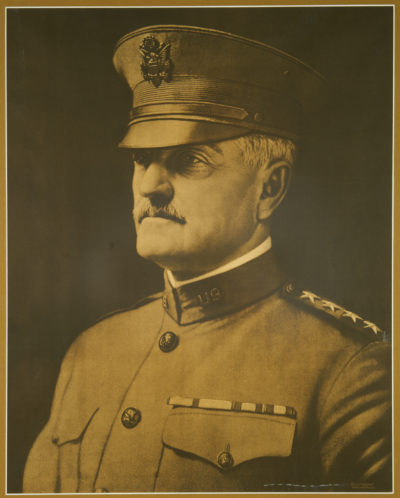 
At the start of the United States' involvement in World War I, President Woodrow Wilson selected Pershing as the Commander of the American Expeditionary Force (AEF) after his superior, Frederick Funston, died suddenly from a heart attack in February 1917.

Pershing was officially installed in the position on May 10, 1917 and held the post until 1918. On October 6, 1917, Pershing, then a major general, was promoted to full general in the National Army. He bypassed the three-star rank of lieutenant general and was the first full general since Philip Sheridan in 1888. As AEF commander, Pershing was responsible for the organization, training, and supply of a combined professional and draft Army and National Guard force that eventually grew from 27,000 inexperienced men to two Armies, with a third forming as the war ended, totaling more than two million soldiers.