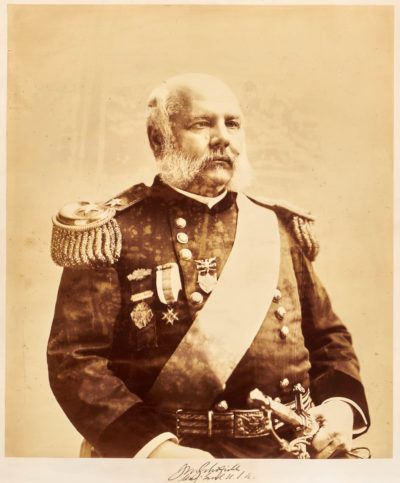 Schofield graduated from the United States Military Academy (USMA) at West Point in 1853 and commanded for the Union Army during the Civil War. In 1873, he was instrumental in drawing military attention to the strategic potential of establishing a Naval presence in the Hawaiian Islands, recommending a naval base at Pearl Harbor following secret investigations for William Belknap, Secretary of War under President Grant.

Thereafter, he served as Superintendent at USMA (1876 – 1881). He died in 1906 and was buried in Arlington National Cemetery. He is memorialized by the military installation Schofield Barracks, Hawaii.

Schofield is remembered for his “Definition of Discipline,” a lengthy quotation that all cadets at USMA, Officer Candidate Schools, and the United States Air Force Academy are required to memorize:

“The discipline which makes the soldiers of a free country reliable in battle is not to be gained by harsh or tyrannical treatment. On the contrary, such treatment is far more likely to destroy than to make an army. It is possible to impart instruction and give commands in such a manner and such a tone of voice as to inspire in the soldier no feeling, but an intense desire to obey, while the opposite manner and tone of voice cannot fail to excite strong resentment and a desire to disobey. The one mode or other of dealing with subordinates springs from a corresponding spirit in the breast of the commander. He who feels the respect which is due others cannot fail to inspire in them regard for himself; while he who feels, and hence manifests, disrespect toward other, especially his inferiors, cannot fail to inspire hatred against himself.”