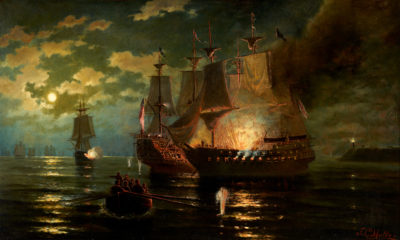 
From 1896: The Army and Navy Club, gift of Gift of Lieutenant John H. Moore, USN


The Battle of Flamborough Head took place on September 23, 1779 in the North Sea off the coast of Yorkshire between a combined Franco-American squadron, led by Continental Navy officer John Paul Jones, and two British escort vessels protecting a large merchant convoy. It became one of the most celebrated naval actions of the Revolutionary War, despite its relatively small size and considerable dispute over what had actually occurred.

The ship on the left—Alliance—was part of Jones’ force, but was guilty of firing “treacherously” on Jones’ own ship, Bonhomme Richard, instead of the enemy ship, Serapis. During this engagement, Jones uttered his immortal line, “I have not yet begun to fight!” Though the United States prevailed in the battle, the Bonhomme Richard sank thirty-six hours after Jones’ victory.