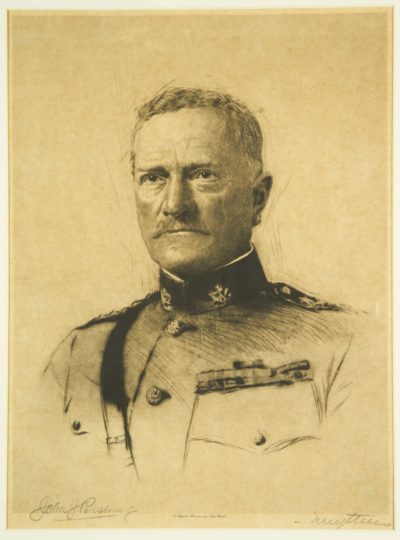 
The artist, Josef Pierre Nuyttens, was a Belgian-American illustrator who emigrated to the United States in 1925. He was well known for his portraits of notable persons of the day: Calvin Coolidge, Abraham Lincoln, Thomas Edison and, of course, General Pershing. In the 1930s he was known within the Chicago theatre circuit as a portrait painter of famous performers and as a costume designer for productions of The Swing Mikado and Shakespeare plays. His artwork was exhibited at the White House, the Congressional Library, the New York Public Library, the Royal Palace in Brussels, the Illinois State House in Springfield, and the Art Institute of Chicago. He died on January 9, 1960 in a house fire that destroyed much of his artwork. His work is in many permanent collections, such as the Art Institute of Chicago and the National Portrait Gallery at the Smithsonian Institution.