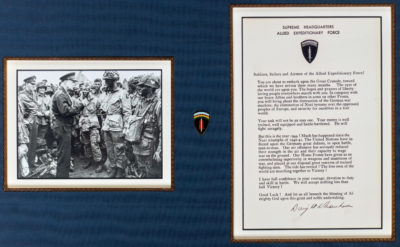 
This order was issued by General Dwight D. Eisenhower to encourage Allied soldiers taking part in the D-day invasion of June 6, 1944. Almost immediately after France fell to the Nazis in 1940, the Allies planned a cross-Channel assault on the German occupying forces, code-named Operation Overlord. By May 1944, 2,876,000 Allied troops were amassed in southern England. The largest armada in history, made up of more than 4,000 American, British, and Canadian ships, lay in wait, and more that 1,200 planes stood ready. Against a tense backdrop of uncertain weather forecasts, disagreements in strategy, and related timing dilemmas, Eisenhower decided before dawn on June 5 to proceed with Overlord. Later that same afternoon, he scribbled a note intended for release, accepting responsibility for the decision to launch the invasion and full blame should the effort to create a beachhead on the Normandy coast fail. Much more polished is his printed Order of the Day for June 6, 1944, which he had begun drafting in February. The order was distributed to the 175,000-member expeditionary force on the eve of the invasion.

The copy of this letter was a gift from Club member Albert H. Small, a World War II Navy Veteran. Small established the Albert H. Small Normandy Institute, which sponsors selected student-teacher teams for intensive study programs about the D-Day Campaign, including travels to France and historic battlefield tours. The projects culminate with each team producing a biography of a soldier that gave his life during the Normandy invasion, to be deposited in the Archive of the Normandy American Cemetery.