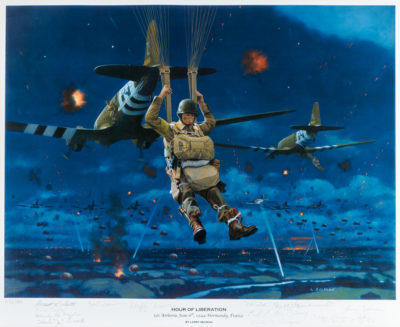 
The Hour of Liberation, June 6, 1944, marked the turning point for the war in Europe and the final destruction of Nazi Germany. The allied conquest began with the daring nighttime assault led by American and British Airborne forces. For the Screaming Eagles of the 101st, this was their first test under fire. America’s finest young men jumped into the flack-filled night sky over Normandy, France, changing history forever.

This print was signed by many of the surviving members of the 101st Airborne at the time of its printing.