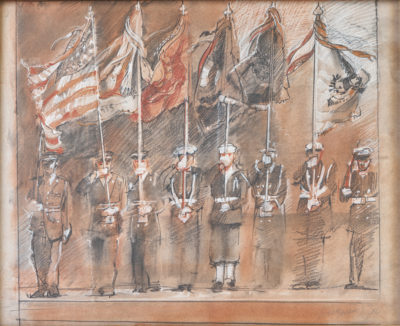 
Artist William Woodward was commissioned in 2010 by The Army and Navy Club to develop studies for a painting to commemorate the many military personnel who have sacrificed their lives during recent conflicts in the Middle East. He created several sketches depicting military personnel in the various services. This drawing, depicting an Honor Guard representing all seven services of The Army and Navy Club members, is one of seven mural sketches Woodward did for the Eagle Grill.

Woodward is the only artist ever to design both the sides of a United States coin, as winner of the invitational design competition for the 1989 silver dollar, minted by the U.S. Treasury to commemorate the 200th anniversary of Congress.