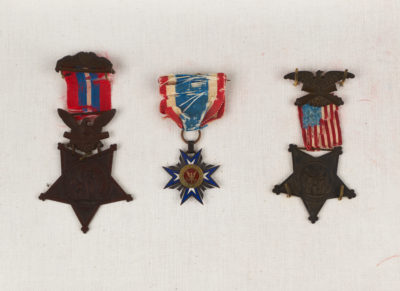 
From 2010: On loan from the Florence Stanley Collection


General David wears three medals in his portrait on view at the Army and Navy Club: The Grand Army of the Republic membership medal, the Military Order of the Loyal Legion of the United States membership medal, and the Society of the Army of the Cumberland membership medal. The medals themselves are displayed directly below the portrait. From left to right, the significance of each award is as follows:

Medal of Honor Citation. Date of issue: 29 March, 1893. Citation: At a critical moment rode to the front of one of his brigades, reestablished its lines, and gallantly led it in a successful assault.

Military Order of the Loyal Legion of the United States Citation. Date of issue: 4 November 1893. Citation: Led his division into action until he was severely wounded.

Society of the Army of the Cumberland membership medal: This medal was issued to the members of the Society of the Army of Cumberland, originally the Army of the Ohio, commanded by General D.C. Buell, but renamed when General W.S. Rosecrans took command on 30 October 1862. Operating mainly in Kentucky, Tennessee, and Georgia, in the battles of Mill Springs, Shiloh, Perryville, Stone’s River, Chickamauga, Chattanooga, Lookout Mountain, and Missionary Ridge, as well as in General William Tecumseh Sherman’s Atlanta campaign—in the latter number 60,773 men. It comprised regiments chiefly from Ohio, Indiana, Illinois, Michigan, Minnesota, and Wisconsin.