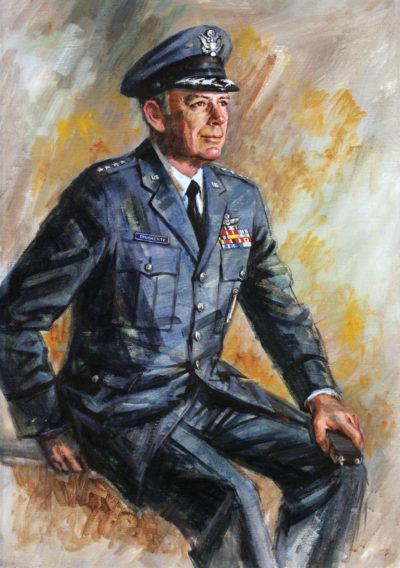 
A member of the 123rd Cavalry, Kentucky National Guard, at World War II’s outbreak, Russ Dougherty entered active duty as an aviation cadet. During the war he flew B-17s and B-29s and served as an Air Training Command instructor pilot. After the war and while serving in the Air Force Reserve, he graduated from the University of Louisville School of Law. In 1948, Dougherty returned to active duty as a judge advocate. However, he kept his wings and continued flying activities. In 1952, when required to elect either legal or pilot duties, he chose to remain on flying status. Strategic Air Command operational and command assignments were complemented by Pentagon and European Command assignments.

He commanded 2nd Air Force, the largest numbered Air Force before re-assignment as Chief of Staff, Supreme Headquarters Allied Powers Europe (SHAPE). He returned to the U.S. in 1974 to command the Strategic Air Command (SAC) at Offutt Air Force Base, Nebraska until his 1977 retirement. After retiring, he was Air Force Association executive director and then practiced law in the Washington, DC, area for many years. General Dougherty is buried at Arlington National Cemetery. He was an Army and Navy Club member.