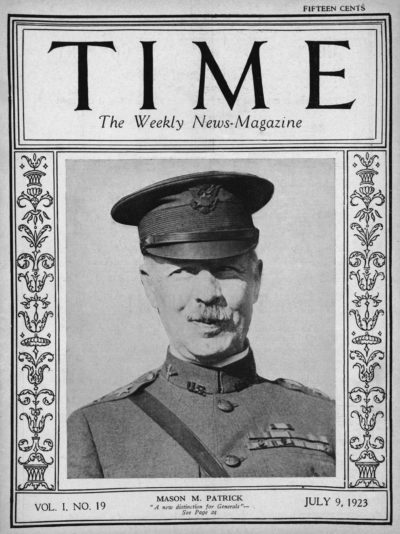 
Major General Mason M. Patrick served as head of the Air Service, American Expeditionary Force, in World War I and then went on to become Chief of the Air Service from 1921-1927. During his career, Patrick played a key role in creation of the Army Air Corps and propelled it towards becoming an independent service.

He was born during the Civil War to a surgeon in the Confederate Army. Patrick graduated second in the West Point Class of 1886 and worked for the next 31 years as an Army engineer, as the commander of engineering units at home and abroad and as a member of the West Point faculty. When the US entered World War I in April 1917, Patrick arrived in Europe to direct major US military construction projects. Though he had put together a distinguished record in engineering, he was about to become an airman, and the proximate cause was an old West Point classmate—General John J. Pershing.  Pershing, commander of the American Expeditionary Force in France, selected Patrick to, as he put it, “whip the Air Service into shape.”

After the war, Patrick had to contend with severe financial turmoil at a time when the nation saw little reason to spend on defense or to build an Air Force. Throughout the 1920s, Patrick was able to stabilize the Air Service, set a vision for the Army air arm, and set it on the road to independence as an Army combat arms branch with passage of the Air Corps Act.