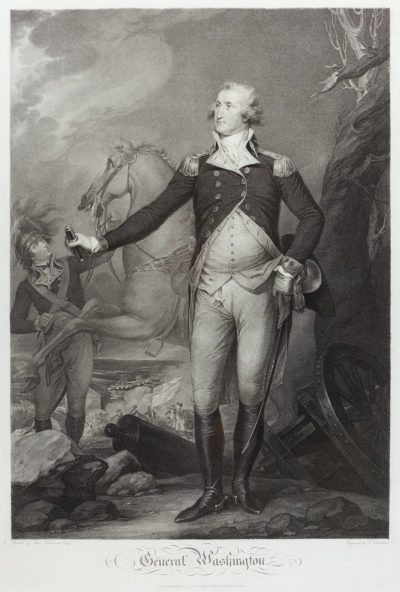 
From 1989: The Army and Navy Club, gift of the Thomas C McGrath Collection


This etching is based off the original 1792 painting by John Trumbull, which resides in the Yale University Art Gallery in New Haven, Connecticut. The image depicts Washington on the night of January 2, 1777, after the Battle of the Assunpink Creek, also known as the Second Battle of Trenton, and before the decisive victory at the Battle of Princeton the next day, January 3. The artist considered this portrait, “the best certainly of those which I painted.”

Trumbull was an American artist during the period of the Revolutionary War, who has been called “The Painter of the Revolution.” He is renowned for his American historical paintings, having painted many members of the original Congress from life. His largescale oil painting, Declaration of Independence, is on display in the Rotunda of the U.S. Capitol building, and was used on the verso of the commemorative bicentennial two-dollar bill.

Another prominent copy of this etching resides in the Yale University Art Gallery in New Haven, Connecticut.