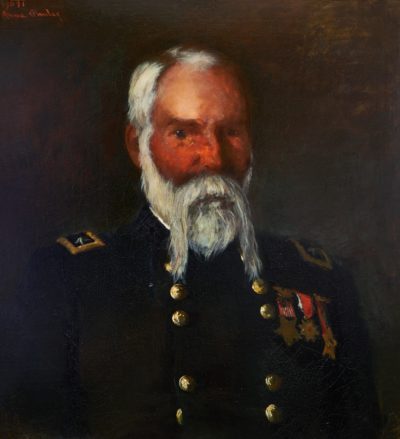 
This 1901 portrait of General David Sloan Stanley was painted by his daughter, Anna Huntington Stanley, an American Impressionist whose works can be found in numerous collections throughout the country, including the Smithsonian American Art Museum. General Stanley is wearing three medals: The Grand Army of the Republic membership medal, the Military Order of the Loyal Legion of the United States membership medal, and the Society of the Army of the Cumberland membership medal. General Stanley is one of three Club Presidents who were awarded the Medal of Honor.

General Stanley was born on June 1, 1828, and entered the Army at Congress, Wayne County, Ohio. Commissioned in the 2nd Dragoon Regiment in 1852 as a lieutenant, Stanley spent his early career in the west. At the onset of the Civil War, Stanley was in Missouri where, in 1861, he participated in an early engagement at Wilson’s Creek near Springfield. Appointed as Brigadier General of Volunteers, he commanded a cavalry division in the Stone’s River Campaign and was brevetted for gallantry at the Battle of Murfreesboro. Stanley led the cavalry corps in the Chickamauga Campaign. On November 20, 1864, at the Battle of Franklin, he rode to the front lines and led it in a successful assault. He would later be awarded the Medal of Honor for his gallantry in action. Wounded in this action, he was brevetted a total of four times during the war.